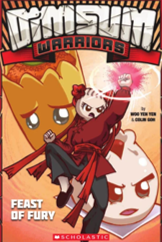 Meet the Dim Sum Warriors! The very mention of their name makes their enemies quiver like tofu! But can their legendary skill overcome a shadowy enemy whose tentacles are everywhere?

The slippery Colonel Quickynoodle has convinced Emperor Redbean Bao to enroll his pampered son Prince Roastpork 'Porky' Bao in the Fried Kung Academy, the most prestigious Dim Sum Warrior school, for "toughening up". But Porky suspects the Colonel of having ulterior motives, and runs away from the Palace instead. He chooses to hide with his newfound friends, Xiajiao and Shaomai, at the School of Steam Kung, much to the alarm of its principal, Master Phoenix Claw. But when the Fried Kung Academy tracks Porky down, a chain of disastrous events is triggered, resulting in the destruction of the centuries-old School of Steam Kung, as well as a coup against the Emperor and Empress by Quickynoodle. The mysteries, however, keep piling up: Who is really behind the plot to usurp the Empire? Why is the School's cook, Auntie Stickyrice, pretending to be a dotty old lady when she's really a combat expert? And just what is lurking in a giant pressure cooker located far beneath Dim Sum City?