The kingdom happens when Geronimo finds a golden door and falls in the Kingdom of Fantasy. He must save the Queen of the Fairies!">
Sale! 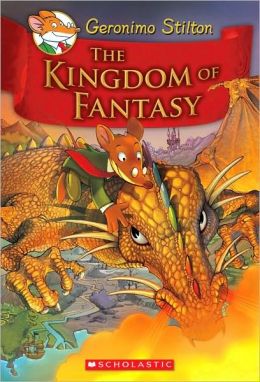 The kingdom happens when Geronimo finds a golden door and falls in the Kingdom of Fantasy. He must save the Queen of the Fairies!

When Geronimo finds a music box in his attic, he is whisked to the kingdom of fantasy. There is a music box inside with a letter written in a strange language. He suddenly becomes dizzy and sees a golden door on which the following verse is written: 'If you wish to enter at all you must go back to being small.' As he goes on with his journey he meets Scriblehopper who translates the message. The queen of the fairies is in trouble and only Geronimo can save her but in order to do so they must cross seven kingdoms and save queen Blossom. Along the way, they make new friends and call themselves the Order of the fairy queen. When they reach the kingdom of fairies they realize that Boils (a chameleon) had given queen Blossom a poisoned rose and so obeying Cackle the queen of witches, who had promised Boils loads of candies if he gave the rose to Blossom. However later when Cackle breaks her word, Boils joins the Order of the fairy queen. In the end Geronimo defeats Cackle. When Queen Blossom asked Geronimo if he would like a reward then Geronimo replies that all he wishes was to go to New Mouse City again. Blossom being the opposite of Cackle agrees to send him back. Geronimo wakes up in his attic only to find a music box by his side. He shuts himself in his office and for a month he works on developing the 'dream' as a book. The book turns out be huge success and the book ends with the verse: 'All dreams that come form the heart have wings.